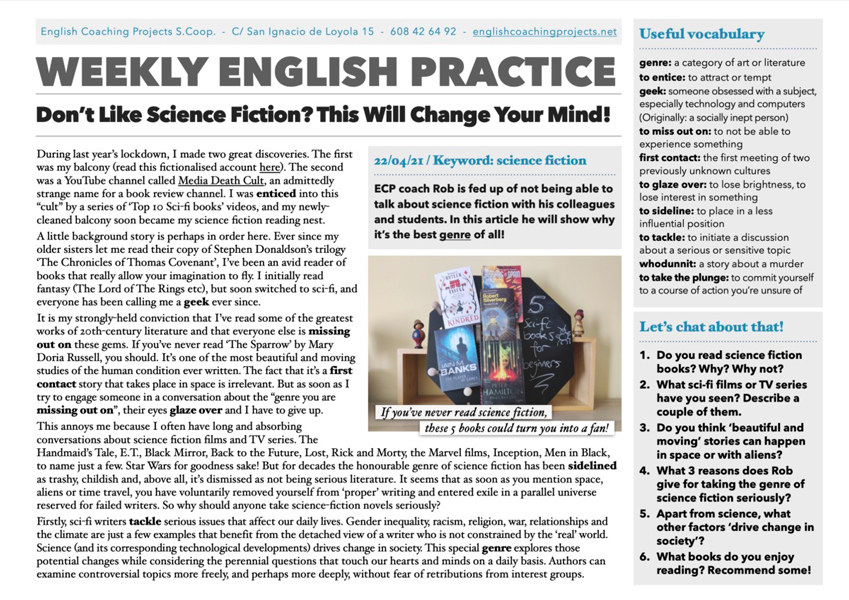 Don’t Like Science Fiction? This Will Change Your Mind!

ECP coach Rob is fed up of not being able to talk about science fiction with his colleagues and students. In this article he will show why it’s the best genre of all!

genre: a category of art or literature

to entice: to attract or tempt

geek: someone obsessed with a subject, especially technology and computers

to miss out on: to not be able to experience something

to glaze over: to lose brightness, to lose interest in something

to sideline: to place in a less influential position

to tackle: to initiate a discussion about a serious or sensitive topic

whodunnit: a story about a murder

to take the plunge: to commit yourself to a course of action you’re unsure of

Listen to the audio and read the text (refresh the page if it’s not visible).

ECP coach Rob is fed up of not being able to talk about science fiction with his colleagues and students. In this article he will show why it’s the best genre of all!

During last year’s lockdown, I made two great discoveries. The first was my balcony (read this fictionalised account here). The second was a YouTube channel called Media Death Cult, an admittedly strange name for a book review channel. I was enticed into this “cult” by a series of ‘Top 10 Sci-fi books’ videos, and my newly-cleaned balcony soon became my science fiction reading nest.

A little background story is perhaps in order here. Ever since my older sisters let me read their copy of Stephen Donaldson’s trilogy ‘The Chronicles of Thomas Covenant’, I’ve been an avid reader of books that really allow your imagination to fly. I initially read fantasy (The Lord of The Rings etc), but soon switched to sci-fi, and everyone has been calling me a geek ever since.

It is my strongly-held conviction that I’ve read some of the greatest works of 20th-century literature and that everyone else is missing out on these gems. If you’ve never read ‘The Sparrow’ by Mary Doria Russell, you should. It’s one of the most beautiful and moving studies of the human condition ever written. The fact that it’s a first contact story that takes place in space is irrelevant. But as soon as I try to engage someone in a conversation about the “genre you are missing out on”, their eyes glaze over and I have to give up.

This annoys me because I often have long and absorbing conversations about science fiction films and TV series. The Handmaid’s Tale, E.T., Black Mirror, Back to the Future, Lost, Rick and Morty, the Marvel films, Inception, Men in Black, to name just a few. Star Wars for goodness sake! But for decades the honourable genre of science fiction has been sidelined as trashy, childish and, above all, it’s dismissed as not being serious literature. It seems that as soon as you mention space, aliens or time travel, you have voluntarily removed yourself from ‘proper’ writing and entered exile in a parallel universe reserved for failed writers. So why should anyone take science-fiction novels seriously?

Firstly, sci-fi writers tackle serious issues that affect our daily lives. Gender inequality, racism, religion, war, relationships and the climate are just a few examples that benefit from the detached view of a writer who is not constrained by the ‘real’ world. Science (and its corresponding technological developments) drives change in society. This special genre explores those potential changes while considering the perennial questions that touch our hearts and minds on a daily basis. Authors can examine controversial topics more freely, and perhaps more deeply, without fear of retributions from interest groups.

Secondly, preferring to write in a non-standard genre doesn’t make you a worse writer. The prose in books by authors such as David Mitchell, Audrey Niffenegger, Iain M. Banks and Octavia E. Butler can be breath-taking and extraordinarily moving. It stays with you long after you reluctantly turn the last page.

Thirdly, good science fiction extrapolates ideas and concepts from real science and puts them at the service of a good story. ‘Blade Runner’, for example – based on Philip K. Dick’s short story ‘Do Androids Dream of Electric Sheep?’ – is an intriguing detective story at heart, that, while solving the classic whodunnit, discusses the implications of creating artificial intelligence and how that will intersect with our very human instincts of possession and love. In the end, it’s a captivating love story.

So, why not take the plunge? There’s a whole world universe out there waiting for you and your beautiful mind. Go explore!

Take a moment to look at these related articles!

Could our digital records disappear in a disaster or an attack?

Living on the ISS can seriously damage your health!